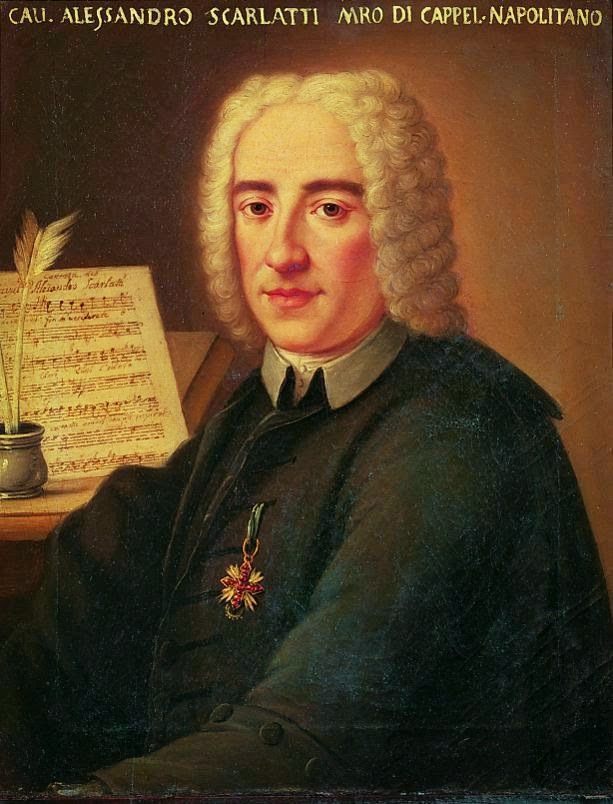 Two more gems from the reclaimed record pile, ones which I had originally obtained in 1980 from my early record-collecting mentor Bill Brooks. Together they represent the only two recordings made before the advent of LP of examples from the set of six "concerti grossi" by Alessandro Scarlatti (which he himself had called "sonate a quattro") published in London in 1740 by Benjamin Cooke, fifteen years after the composer's death. The recordings also share the common denominator of having been recorded during the Second World War in countries which were the primary European Axis Powers during that conflict (Germany and Italy), but they represent greatly differing approaches to performing this music. Not surprisingly, the German approach is more scholarly and sedate, played by solo strings with a mostly inaudible harpsichord supporting them; the Italians (performing in Naples, where Scarlatti actually worked) are more enthusiastic, sometimes to the point of suspect intonation by the strings of the small chamber orchestra used, with an all-too-audible piano being used for the continuo. Both records are most enjoyable, nevertheless:

The great Czech maestro Rafael Kubelík (1914-1996) made no less than three commercial studio recordings of Smetana's cycle of symphonic poems, Má Vlast in its complete form: the first for Mercury in 1951, with the Chicago Symphony; the second for Decca/London in 1958, with the Vienna Philharmonic, and the third for Deutsche Grammophon in 1971, with the Boston Symphony. There have also been commercial releases of live performances. Obviously Kubelík had a passionate identification with the work, and so it's fitting that his first-ever recording, made at the age of 23 while the Czech Philharmonic was on tour in London in 1937, should have been of two of the cycle's most popular segments:

The Czech Philharmonic came to London three times during the late 1930s to concertize and make recordings. The 1937 visit also produced a recording of Dvořák's "New World" Symphony conducted by George Szell. For the other tours, in 1935 and 1938, the conductor was the orchestra's music director, Václav Talich, who between the two visits produced priceless recordings of Dvořák's Sixth, Seventh and Eighth Symphonies and complete Slavonic Dances, plus Josef Suk's Serenade for Strings.  Talich stayed home for the 1937 tour, however, so Szell and Kubelík deputized.
Posted by Bryan at 1:15 PM 2 comments:

The great popularity, during the 1940s, of the First Piano Quartet doubtless caused many imitators to be spawned. One that was good enough to get promoted and recorded (by Columbia, in direct competition with the FPQ which was on Victor) was the Philharmonic Piano Quartet, formed by four young Juilliard alumni. Unlike the FPQ's players, which were cloaked in anonymity on the labels, the Philharmonic's were identified as Ada Kopetz, Bertha Melnik, Max Walmer and John Scales (a great name for a pianist, no?), but there's nothing in the album to enable one to match names to faces! (My thanks to a reader for providing another photo that identifies the players by name - see the comments below.) The group made two albums for Columbia, of which this was the first:

Can anybody out there identify the melody of the "Cradle Song?" It sounds vaguely familiar but I can't place it for the life of me. The "Peter and the Wolf" excerpt is identified as "Procession", which would lead one to believe the final section will be heard - as indeed it is, but not until after the themes of Peter and the hunters in their original forms are, as well as a bit of the music heard while the bird is taunting the wolf! Sam Morganstern, the composer of the last item, was best known not for his composing but for his musical reference works; I grew up with a dog-eared copy of his "Dictionary of Musical Themes" which he co-authored with conductor Howard Barlow.
Posted by Bryan at 5:39 PM 3 comments:

Growing up in the 70s, I would hear the term "Big Five" bandied about as it applied to American orchestras - those of New York, Philadelphia, Boston, Chicago and Cleveland.  Thirty years prior, the number was the "Big Three" - neither the Chicago nor the Cleveland orchestras reached that exalted status until Fritz Reiner took over the one, and George Szell (1897-1970) the other.  Szell assumed the directorship in Cleveland in 1946, and held the post until his death, transforming the orchestra in the process.  Among the first of their many recordings is the following:

This wasn't Szell's first recording of the Mozart E Flat Symphony.  One of his earliest recordings featured it, an acoustical version for German Odeon with the orchestra of the Berlin Staatsoper in 1924.  Of great rarity, I should imagine - I've never encountered it.

The Cleveland Orchestra was already a fine one when Szell took it over, as many recordings with it by Nikolai Sokoloff, Artur Rodzinski and Erich Leinsdorf prove.  One of the first I ever owned is this one by Rodzinski of an old warhorse:

This is one of the reclaimed records that I talk about in this post; I bought it new from Clark Music in Decatur, Ga., in 1974, when I was 11, and I have been, so far, the only owner of this copy.
Posted by Bryan at 2:56 PM 8 comments: