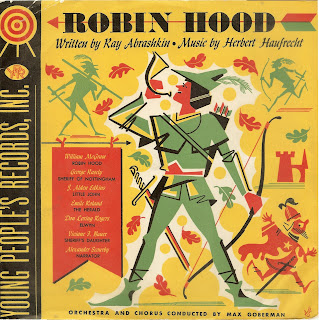 Well, this is a little bit of a change of pace.  I present today a pair of records that I had and loved as a kid, Young Peoples Records' 1950 presentation of the Robin Hood story.  Admittedly, the tale is a bit sugar-coated in this version, with the Sheriff of Nottingham presented as a cowardly buffoon (one can hardly imagine the real Sheriff submitting as meekly to his eventual fate as this one does) - but how well-characterized he is, by the Metropolitan Opera tenor George Rasely (1889-1965).  And how wonderful are the tunes!  I really repsonded, as a youngster (and still do), to the maddeningly memorable, ersatz-Elizabethan songs, and the Sportsman's Song on side 3 owes quite a bit to Gilbert & Sullivan with its choral repetitions of the soloist's words.  The music was written by Herbert Haufrecht (1909-1998), about whom I can find out little other than that contained in his New York Times obituary here.  The narration is by Alexander Scourby (1913-1985), best-known as the first person to record the entire Bible, on talking books for the blind in the early 1940s - click here to see the American Federation of the Blind's page about Scourby.  And the script and lyrics are by Raymond Abrashkin (1911-1960), a frequent collaborator on Young Peoples Records, as was the conductor, Max Goberman.

As I said, I had these records as a child, but I re-acquired the set about five years ago from an online dealer, and therefore obtained what I didn't have previously, namely, the original double sleeve (the front of which is pictured above).  The lyrics and text of the story are reproduced inside, and they are provided as JPG files with this download.

I had several dozen Young Peoples Records (and records on its affiliated label, Children's Record Guild), which, even in the early 1970s, were still available as 78s in specialized outlets.  Therefore I was fascinated by David Bonner's book about them which appeared in 2008.  (David's blog, named after his book, "Revolutionizing Children's Records," is among my blog links at right.  His first post of 2009 contains a bit written by yours truly.)  In the wake of the book's appearance, I transferred four Young Peoples Records on classical music subjects, all dating from the late 1940s, and posted them to the RMCR newsgroup.  These are still available, along with a new FLAC version; here are the details:

At the same time I uploaded a ridiculously abridged recording of Prokofiev's "Peter and the Wolf," from a Cricket 78 that has been in my possession since I was seven years old (and, I'm afraid, sounds like it!):

UPDATE (Aug. 25, 2015): I have just learned the actual provenance of the abridged "Peter and the Wolf" - it derives from a Royale LP, No. 1246, where the narration is credited to Bob Danvers-Walker (1906-1990), best known for his narration on British Pathé newsreels.  The anonymous orchestra is conducted by Reginald Leopold (1907-2003). Royale, of course, was an Eli Oberstein label, and "Obie" was known to license a bunch of children's material to Cy Leslie, founder of Pickwick Records, to jumpstart his Cricket Records line. This recording was one of those. The Royale issue was a full-length recording of "Peter and the Wolf" - which Cricket hacked down to a six-minute length, while cloaking Mr. Danvers-Walker in pseudonymity by borrowing the first name of his conductor!
Posted by Bryan at 4:33 PM