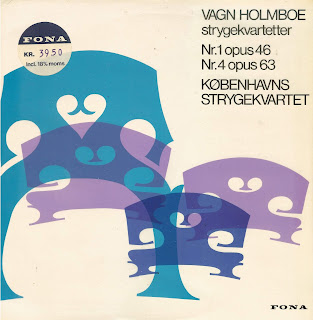 The Copenhagen String Quartet (Tutter Givskov and Mogens Lydolph, violins; Mogens Bruun, viola; Asger Lund Christiansen, cello) gave the first performances of most of Vagn Holmboe's string quartets from No. 7 on (there were twenty in all). For the Danish Fona label, the group recorded the first ten of these, on five LPs. I have three of them:

The first of these LPs is a 1970 reissue of a recording originally made in 1963; the other two are 1973 issues. The liner notes, included with the downloads, are all in Danish, so if anyone conversant with that language cares to translate, the rest of us would be much obliged! It should be noted that the cellist in this ensemble, Asger Lund Christiansen, had also played in the Erling Bloch Quartet, who made the first recording of any of Holmboe's quartets, in 1951.
Posted by Bryan at 12:58 PM